from Love and War by The Four Fathers 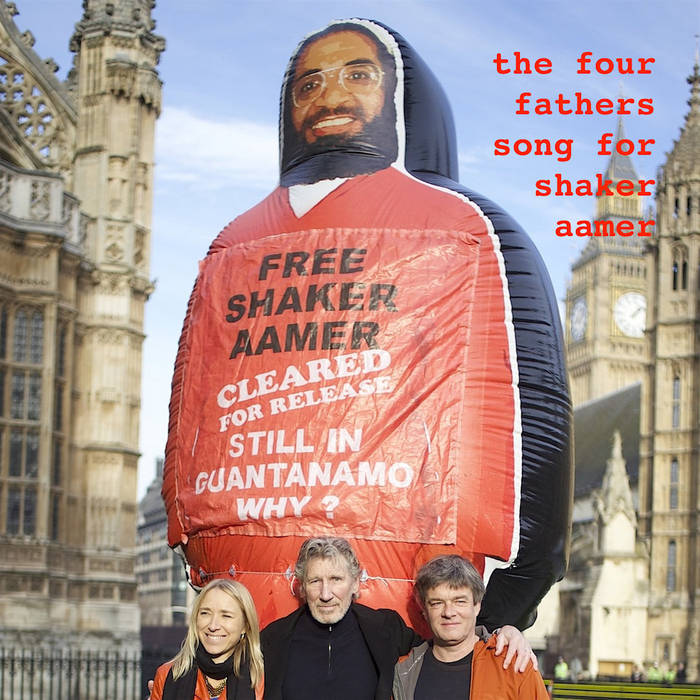 'Song for Shaker Aamer' tells the story of Shaker Aamer, the last British resident held in the US prison at Guantánamo, who has twice been approved for release - in 2007 and 2009 - and yet is still held. The song was used in the campaign video for We Stand With Shaker, a campaign to free Shaker, and to return him to his wife and his four children in London, which was established in November 2014 by Andy Worthington and Joanne MacInnes. The song features Shaker's voice, captured by a US news team as he shouted from his cell.
The centrepiece of the campaign was a giant inflatable figure of Shaker Aamer, which nearly a hundred MPs and celebrities were photographed with to show their support for Shaker.
See: westandwithshaker.org
and: westandwithshaker.org/tagged/inflatables
Also see: www.andyworthington.co.uk/category/shaker-aamer/
For the video, see: youtu.be/tWnfLn5qdT8
Update, Nov. 1, 2015: See The Four Fathers play an updated version of the song, reflecting Shaker's release on Oct. 30: youtu.be/QUu739fFEPs
Also see the 'unplugged' video: youtu.be/J2pOBobLX14
Update, July 2016: Also feel free to listen to - and buy if you wish - the 'Freedom Version' of 'Song for Shaker Aamer', recorded in May 2016:
thefourfathers.bandcamp.com/track/song-for-shaker-aamer-freedom-version-2

See this video of Andy Worthington playing the updated version of "Song for Shaker Aamer" at an event calling for the closure of Guantánamo in Washington, D.C. on Jan. 10, 2016: youtu.be/F_Ct5qbiuDw

See coverage of the release of 'Song for Shaker Aamer' on RT: youtu.be/qEVKPFBY3aE
And also see the coverage in the Morning Star: www.morningstaronline.co.uk/a-a922-Song-for-Shaker-Aamer-aims-to-keep-case-alive#.VgMbUCglbS8

In November 2015, the influential US political website Shadowproof featured 'Song for Shaker Aamer' as its 'Protest Song of the Week.' Kevin Gosztola wrote: “[What] perhaps makes [the song] so enduring is how it pays tribute to the man who dissented and resisted from within Guantánamo all throughout his detention … Aamer’s words punctuate the song, giving it more gravitas and affirming why he is one of the more inspirational men to have been detained at Guantánamo.”
See: shadowproof.com/2015/11/02/protest-song-of-the-week-song-for-shaker-aamer-by-the-four-fathers/

The photo is from the launch of We Stand With Shaker on November 24, 2014 outside the Houses of Parliament. In the centre, campaign supporter Roger Waters (ex-Pink Floyd) with campaign founders and co-directors Joanne MacInnes and Andy Worthington (Photo: Stefano Massimo).

from Love and War, released September 21, 2015
Written by Andy Worthington